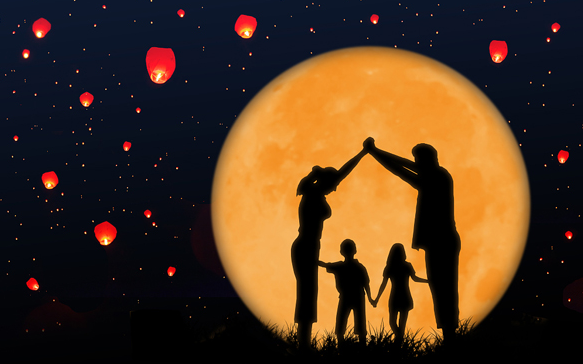 In the eyes of Chinese people, Mid-Autumn Festival is the second-biggest festival after the Chinese New Year. It's a time when families come together to appreciate the full moon and eat mooncakes. In fact, besides these two traditions, there are many others.

Since ancient times, there has been a tradition of worshiping the moon in Mid-Autumn Festival in China, which stems from the deification of the moon by the ancients.

Nowadays, this tradition is disappearing. It's rare to see families worshiping the moon in big cities. In some old towns or tourist cities, people will hold a ceremony to worship the moon in a square, park, or street, but this is more like a performance.

In ancient times, watching the tide on the Qiantang River in East China's Zhejiang province was another grand event of Mid-Autumn Festival. The tide is very torrential and magnificent and attracts many onlookers.

It had been recorded in detail since the Han Dynasty (206 BC-220). Many famous ancient poets, like Su Shi in the Song Dynasty (960-1279), wrote about the grand occasion in their poems.

Previous: Traditions You May Not Know About Mid-Autumn Festival In China
Next: Trade Should Be Propeller Of Peace: Jack Ma